Home What Is Cancer? 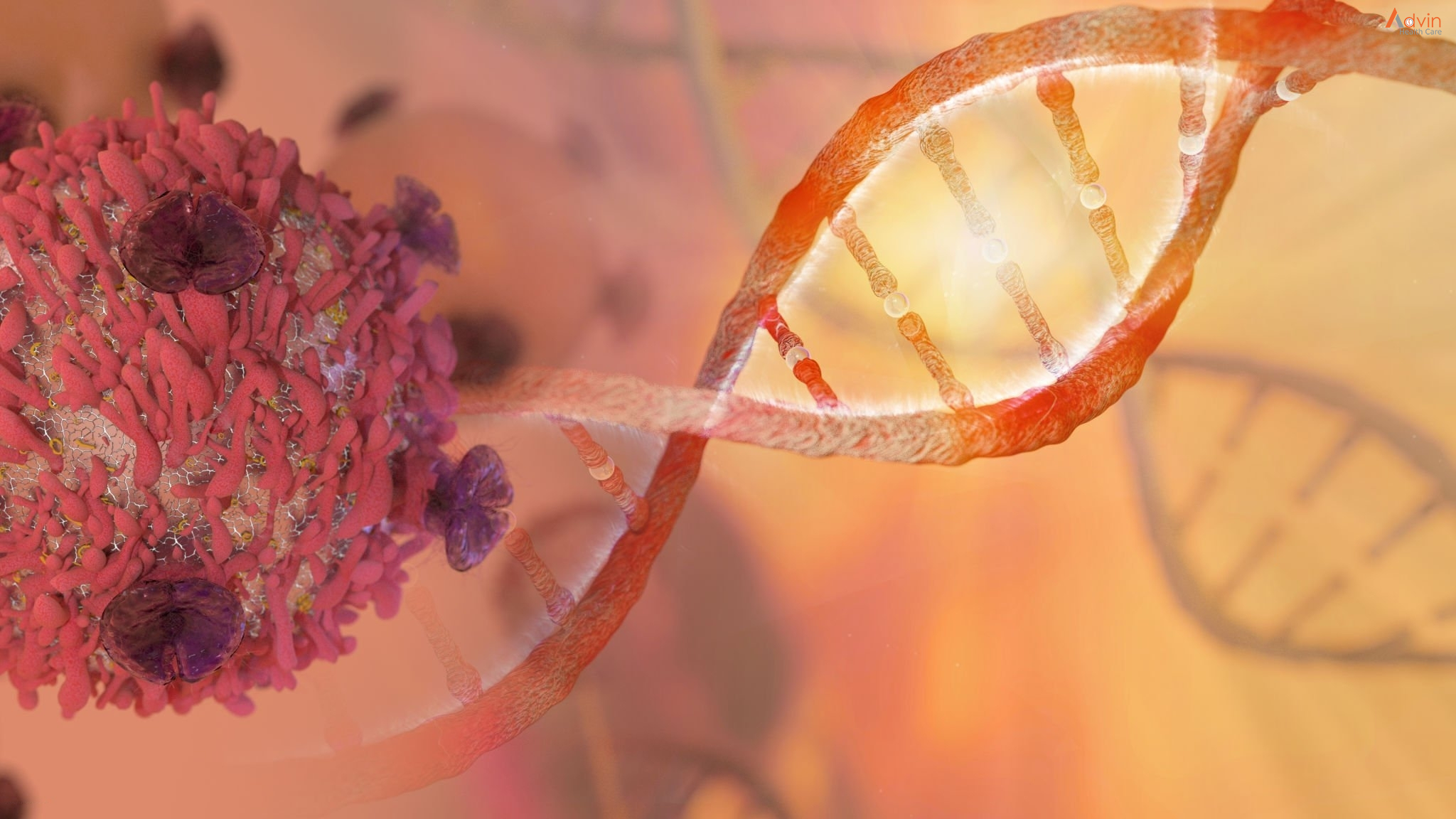 Cancer is a disease in which some of the body’s cells grow uncontrollably and spread to other parts of the body.Cancer can start almost anywhere in the human body, which is made up of trillions of cells. Normally, human cells grow and multiply (through a process called cell division) to form new cells as the body needs them. When cells grow old or become damaged, they die, and new cells take their place. 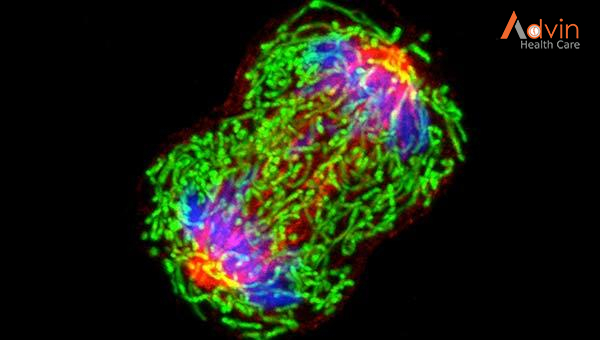 Sometimes this orderly process breaks down, and abnormal or damaged cells grow and multiply when they shouldn’t. These cells may form tumors, which are lumps of tissue. Tumors can be cancerous or not cancerous (benign).

Cancerous tumors spread into, or invade, nearby tissues and can travel to distant places in the body to form new tumors (a process called metastasis). Cancerous tumors may also be called malignant tumors. Many cancers form solid tumors, but cancers of the blood, such as leukemias, generally do not.

Benign tumors do not spread into, or invade, nearby tissues. When removed, benign tumors usually don’t grow back, whereas cancerous tumors sometimes do. Benign tumors can sometimes be quite large, however. Some can cause serious symptoms or be life threatening, such as benign tumors in the brain.

Cancer cells differ from normal cells in many ways. For instance, cancer cells:

Many times, cancer cells rely so heavily on these abnormal behaviors that they can’t survive without them. Researchers have taken advantage of this fact, developing therapies that target the abnormal features of cancer cells. For example, some cancer therapies prevent blood vessels from growing toward tumors, essentially starving the tumor of needed nutrients.

How Does Cancer Develop? 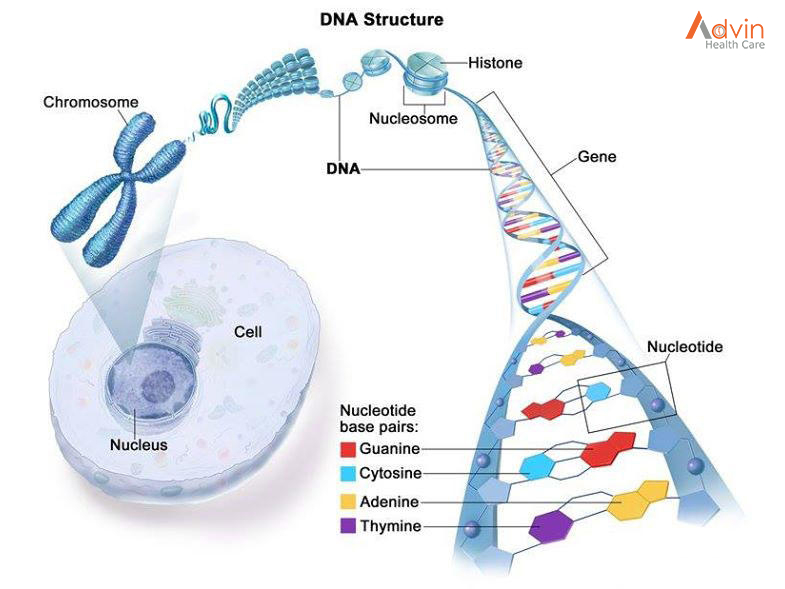 Cancer is a genetic disease—that is, it is caused by changes to genes that control the way our cells function, especially how they grow and divide.

Genetic changes that cause cancer can happen because:

The body normally eliminates cells with damaged DNA before they turn cancerous. But the body’s ability to do so goes down as we age. This is part of the reason why there is a higher risk of cancer later in life.

Each person’s cancer has a unique combination of genetic changes. As the cancer continues to grow, additional changes will occur. Even within the same tumor, different cells may have different genetic changes. 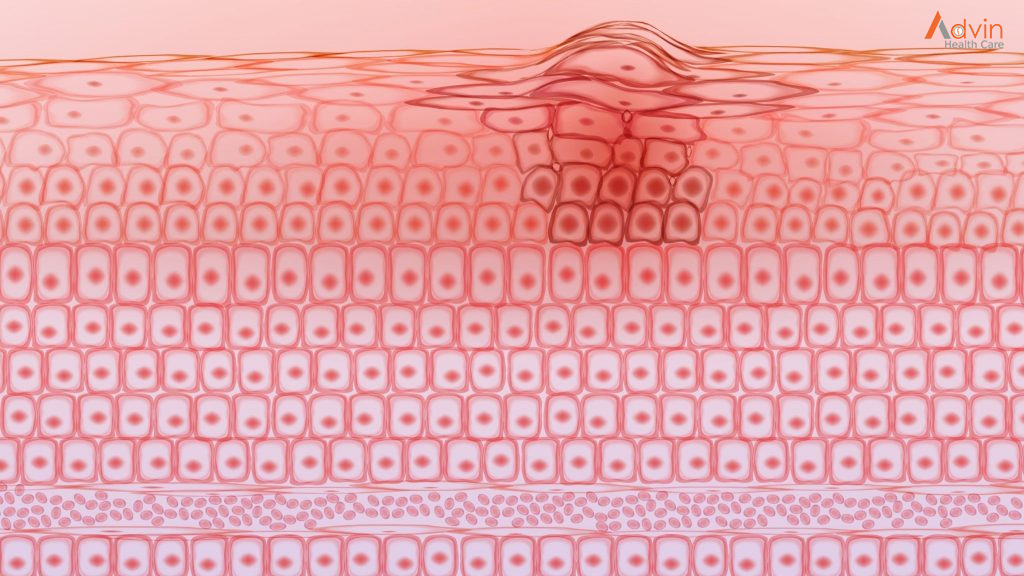 Types of Genes that Cause Cancer

The genetic changes that contribute to cancer tend to affect three main types of genes—proto-oncogenes, tumor suppressor genes, and DNA repair genes. These changes are sometimes called “drivers” of cancer.

Proto-oncogenes are involved in normal cell growth and division. However, when these genes are altered in certain ways or are more active than normal, they may become cancer-causing genes (or oncogenes), allowing cells to grow and survive when they should not.

DNA repair genes are involved in fixing damaged DNA. Cells with mutations in these genes tend to develop additional mutations in other genes and changes in their chromosomes, such as duplications and deletions of chromosome parts. Together, these mutations may cause the cells to become cancerous.

As scientists have learned more about the molecular changes that lead to cancer, they have found that certain mutations commonly occur in many types of cancer. Now there are many cancer treatments available that target gene mutations found in cancer. A few of these treatments can be used by anyone with a cancer that has the targeted mutation, no matter where the cancer started growing. 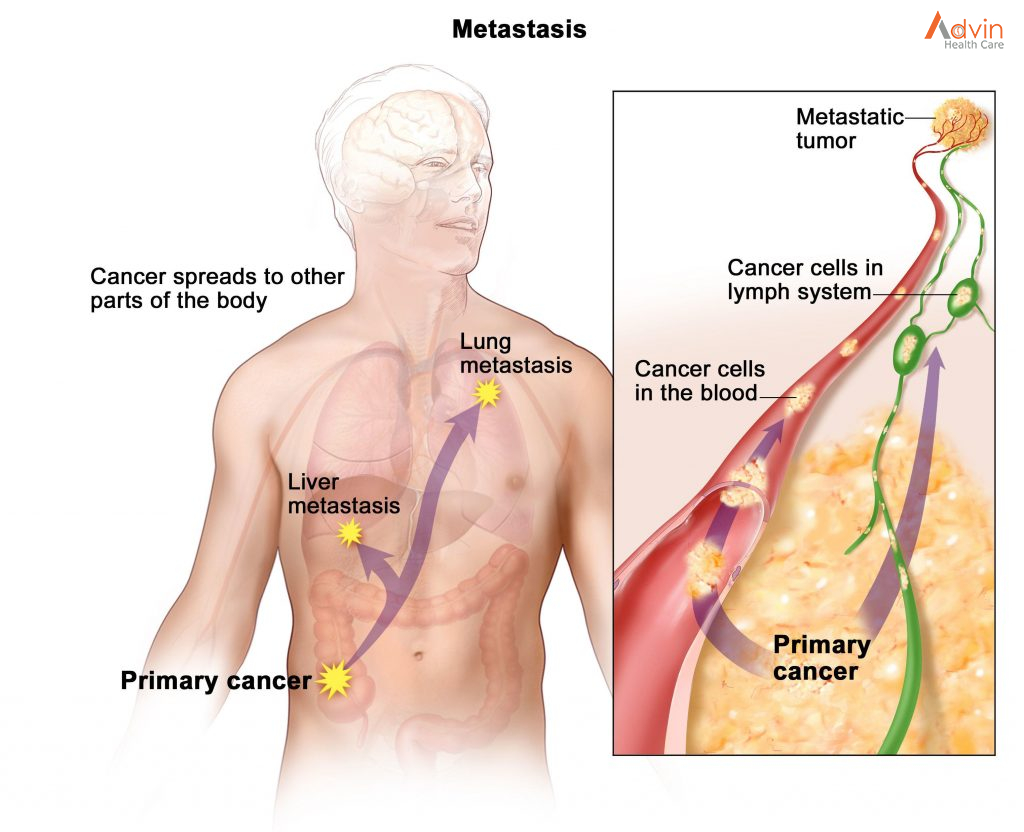 Metastatic cancer has the same name and the same type of cancer cells as the original, or primary, cancer. For example, breast cancer that forms a metastatic tumor in the lung is metastatic breast cancer, not lung cancer.

In some cases, treatment may help prolong the lives of people with metastatic cancer. In other cases, the primary goal of treatment for metastatic cancer is to control the growth of the cancer or to relieve symptoms it is causing. Metastatic tumors can cause severe damage to how the body functions, and most people who die of cancer die of metastatic disease.

Tissue Changes that Are Not Cancer

Not every change in the body’s tissues is cancer. Some tissue changes may develop into cancer if they are not treated, however. Here are some examples of tissue changes that are not cancer but, in some cases, are monitored because they could become cancer:

Here are some categories of cancers that begin in specific types of cells:

Adenocarcinoma is a cancer that forms in epithelial cells that produce fluids or mucus. Tissues with this type of epithelial cell are sometimes called glandular tissues. Most cancers of the breast, colon, and prostate are adenocarcinomas.

Basal cell carcinoma is a cancer that begins in the lower or basal (base) layer of the epidermis, which is a person’s outer layer of skin.

Transitional cell carcinoma is a cancer that forms in a type of epithelial tissue called transitional epithelium, or urothelium. This tissue, which is made up of many layers of epithelial cells that can get bigger and smaller, is found in the linings of the bladder, ureters, and part of the kidneys (renal pelvis), and a few other organs. Some cancers of the bladder, ureters, and kidneys are transitional cell carcinomas. 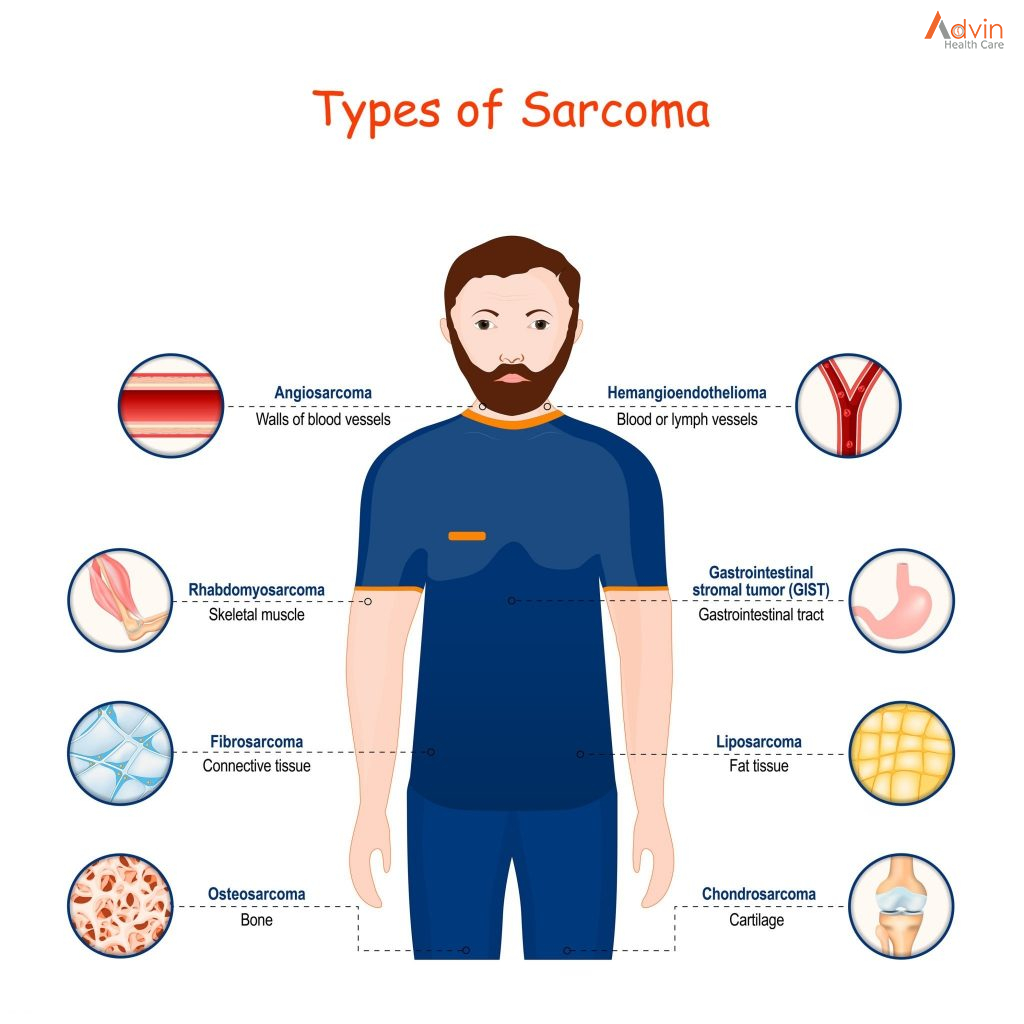 Sarcomas are cancers that form in bone and soft tissues, including muscle, fat, blood vessels, lymph vessels, and fibrous tissue (such as tendons and ligaments).

Osteosarcoma is the most common cancer of bone. The most common types of soft tissue sarcoma are leiomyosarcoma, Kaposi sarcoma, malignant fibrous histiocytoma, liposarcoma, and dermatofibrosarcoma protuberans.

Cancers that begin in the blood-forming tissue of the bone marrow are called leukemias. These cancers do not form solid tumors. Instead, large numbers of abnormal white blood cells (leukemia cells and leukemic blast cells) build up in the blood and bone marrow, crowding out normal blood cells. The low level of normal blood cells can make it harder for the body to get oxygen to its tissues, control bleeding, or fight infections.

There are four common types of leukemia, which are grouped based on how quickly the disease gets worse (acute or chronic) and on the type of blood cell the cancer starts in (lymphoblastic or myeloid). Acute forms of leukemia grow quickly and chronic forms grow more slowly.

Lymphoma is cancer that begins in lymphocytes (T cells or B cells). These are disease-fighting white blood cells that are part of the immune system. In lymphoma, abnormal lymphocytes build up in lymph nodes and lymph vessels, as well as in other organs of the body.

There are two main types of lymphoma:

Hodgkin lymphoma – People with this disease have abnormal lymphocytes that are called Reed-Sternberg cells. These cells usually form from B cells.

Non-Hodgkin lymphoma – This is a large group of cancers that start in lymphocytes. The cancers can grow quickly or slowly and can form from B cells or T cells.

Melanoma is cancer that begins in cells that become melanocytes, which are specialized cells that make melanin (the pigment that gives skin its color). Most melanomas form on the skin, but melanomas can also form in other pigmented tissues, such as the eye.

There are different types of brain and spinal cord tumors. These tumors are named based on the type of cell in which they formed and where the tumor first formed in the central nervous system. For example, an astrocytic tumor begins in star-shaped brain cells called astrocytes, which help keep nerve cells healthy. Brain tumors can be benign (not cancer) or malignant (cancer).

Other Types of Tumors

Germ cell tumors are a type of tumor that begins in the cells that give rise to sperm or eggs. These tumors can occur almost anywhere in the body and can be either benign or malignant.

Neuroendocrine tumors form from cells that release hormones into the blood in response to a signal from the nervous system. These tumors, which may make higher-than-normal amounts of hormones, can cause many different symptoms. Neuroendocrine tumors may be benign or malignant.

Carcinoid tumors are a type of neuroendocrine tumor. They are slow-growing tumors that are usually found in the gastrointestinal system (most often in the rectum and small intestine). Carcinoid tumors may spread to the liver or other sites in the body, and they may secrete substances such as serotonin or prostaglandins, causing carcinoid syndrome.