Lumpectomy (lum-PEK-tuh-me) is surgery to remove cancer or other abnormal tissue from your breast.

During a lumpectomy procedure, the surgeon removes the cancer or other abnormal tissue and a small amount of the healthy tissue that surrounds it. This ensures that all of the abnormal tissue is removed.

Lumpectomy is also called breast-conserving surgery or wide local excision because only a portion of the breast is removed. In contrast, during a mastectomy, all of the breast tissue is removed. Doctors may also refer to lumpectomy as an excisional biopsy or quadrantectomy.

Lumpectomy is a treatment option for early-stage breast cancer. Sometimes lumpectomy is used to rule out a cancer diagnosis. When a lumpectomy surgery is performed to remove cancer, it usually is followed by radiation therapy to the breast to reduce the chances of cancer returning.

The goal of lumpectomy is to remove cancer or other abnormal tissue while maintaining the appearance of your breast. Studies indicate that lumpectomy followed by radiation therapy is as effective in preventing a recurrence of breast cancer as removal of the entire breast (mastectomy) for early-stage breast cancer.

Your doctor may recommend lumpectomy if a biopsy has shown that you have cancer and that the cancer is believed to be small and early stage. Lumpectomy may also be used to remove certain noncancerous or precancerous breast abnormalities.

Your doctor may not recommend lumpectomy for breast cancer if you:

What should I expect before a lumpectomy?

The details of your case (such as a tumor’s size or location) can affect how your breast looks after surgery. Your surgeon will review your imaging with the radiologist and design a surgical procedure which will focus on removing the entire cancer area.

In some cases, due to the larger size of the tumor, the breast surgeon may enlist the assistance of a plastic/reconstructive surgeon to perform combined team approach surgery called an oncoplastic lumpectomy. In an oncoplastic operation, the cancer is a bit bigger than suitable for a traditional lumpectomy (removing more than 20% of the breast volume), so the planned surgery takes into account the larger piece of breast tissue needing to be removed and allows for better scar placement, reshaping and nipple position. Often oncoplastic surgery requires a surgery on the other, normal breast to reduce the volume as well to match the cancer breast size.

Locating the area to be removed

Your lumpectomy procedure begins with locating the area of your breast that contains the abnormality (localization procedure). To do this, a doctor who uses imaging tests to diagnose and treat diseases (radiologist) uses a mammogram or ultrasound to locate the tumor and insert a thin wire, needle or small radioactive seed. Your surgeon uses this as a guide to find the precise area that needs to be removed during surgery.

If you have a lump or mass in your breast that can be easily felt through the skin, the localization procedure may not be necessary because the surgeon can more easily find the abnormal area to be removed.

Sentinel node biopsy. During this procedure your surgeon removes only the first one or two nodes into which the cancer drains (sentinel nodes). These are then tested for cancer. Your doctor may recommend this procedure if there are no concerns about enlarged lymph nodes prior to your surgery.

Before your surgery, a radioactive substance or blue dye or both is injected into the area around the cancer or the skin above the cancer. The dye travels to the sentinel node or nodes, allowing your surgeon to identify and remove them.

Axillary lymph node dissection. During this procedure, the surgeon removes a number of lymph nodes from your armpit. Your surgeon may recommend this procedure if a lymph node biopsy done before surgery shows signs of cancer. 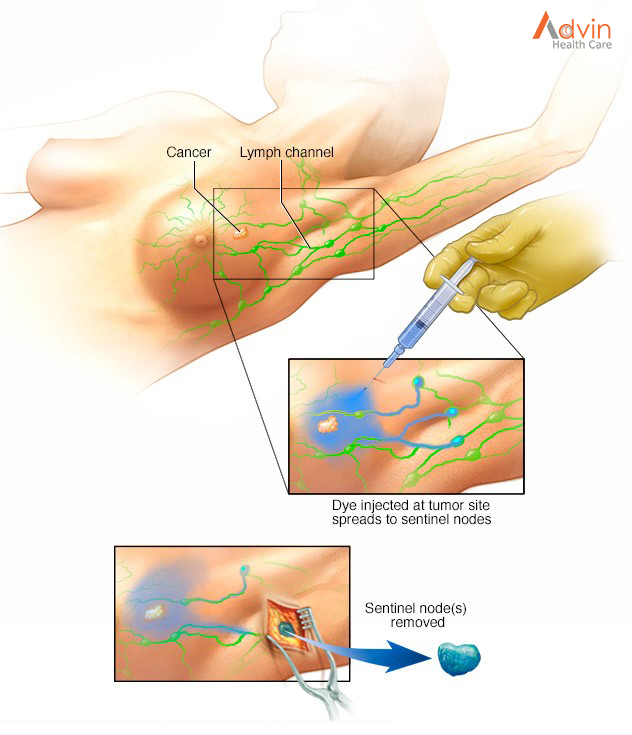 A lumpectomy is usually performed using general anesthesia, which will put you into a sleep-like state during the procedure.

The surgeon will then close the incisions with attention to preserving the appearance of your breast, using stitches (sutures) that will either dissolve on their own or be removed later by your doctor. Your surgeon may also place thin adhesive strips or use glue on the incision to keep it closed until it heals.

After your surgery, you’ll be taken to a recovery room. During this time, your blood pressure, pulse and breathing will be monitored.

If you’ve had outpatient surgery — usually lumpectomy and sentinel node biopsy — you’ll be released when your condition is stable.

If you’ve had axillary lymph node dissection, you may need to stay in the hospital for a day or two if you’re experiencing pain or bleeding.